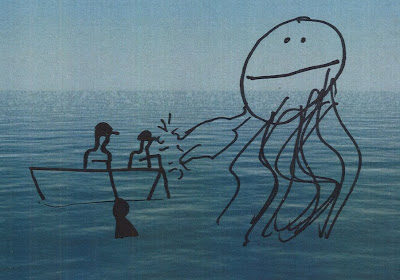 Walking along, we made up a movie, seeing it happen.
The lights faded out like sunset, the curtains parted and
onto the screen the flickering movie began. A father
and son were fishing. Their feet dangled over the edge
of the pier, the boy kicking his sneakers as the man
sunk a hook through the worm and cast it out into sea.
They talked about the baseball scores and laughed
about their neighbor’s car. Hungry gulls watched
from the circling air and something else without eyes
sensed them through the cold water. The boy tugged
his fishing line, he thought he felt a bite. Small waves
lapped around pilings and his father was telling him
about the footbinding tradition in Japan, when a
weird noise bubbled towards them from the depth.
It sounded something like a backwards foghorn
being played in an oyster shell powered by
rubber bands. A tense moment passed, then
the father laughed, ruffled his kid’s blond crewcut
and lit a cigarette. His hands trembled, cupping
the flame. Quickly, he threw the match into the sea.
“When I was your age...” the man began to say,
but suddenly the water turned into foam as a
four-story jellyfish raised itself, gurgling out
of the water and pulled them away. The water
calmed down, the seagulls landed on the dock
and ate their abandoned chicken sandwiches.
That was it, the film slipping through the projector
clacked at the end of the reel. The houselights
came back on, calypso music played on speakers
for the two people waiting for the next feature.

Annotated Jellyfish Movie:
Yes, we used to walk along in Portland, Maine
past the movie theater and making up our own
big ideas like this one for a Super-8 film never made.

Jellyfish picture:
by Rustle
Posted by allen frost at 5:21 PM