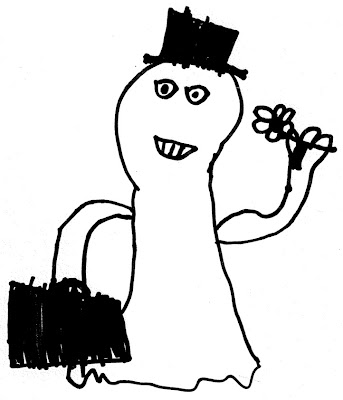 My sister bought a ghost for five dollars.

Her friend arranged the sale and gave us

specific directions which we followed precisely.

First we wrote a welcoming letter to the ghost.

At 8 o’clock we opened the front door an inch

and placed the note beside a candle. We sat

in the hallway for a while, lit by the yellow glow.

We were tuned to the ghost frequency, listening

for the smallest sigh or voice, jumping at flickers.

I guess we were expecting a ghost to arrive with

a suitcase. I know I was. It was easy to believe

in that. But after waiting a while, my sister gave up

grabbed the letter and stormed to the phone.

Maybe we were swindled. It’s hard to tell

when you’re buying something invisible

and just because you don’t see what

you expected doesn’t mean something

I shut the door, blew the candle out

and carried the smoke with me.

drawings by Rustle and Rosa
another chapter selection from
the autobiography I've been working on.
Posted by allen frost at 4:56 PM