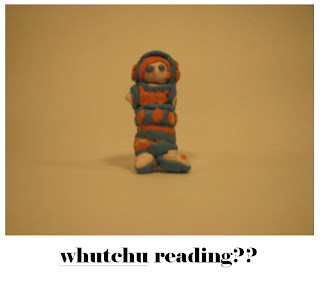 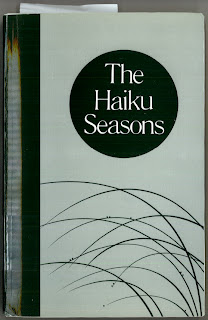 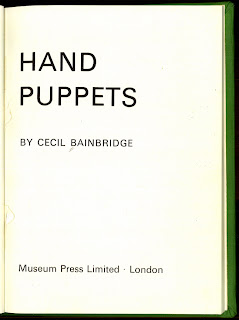 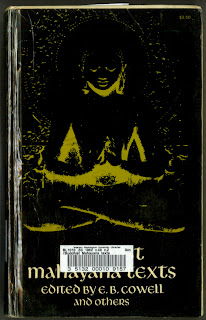 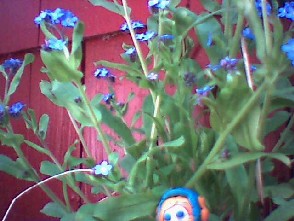 Puppets by Rosa
Posted by allen frost at 1:41 PM No comments: 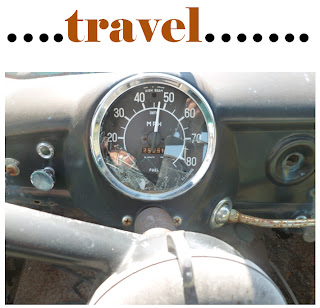 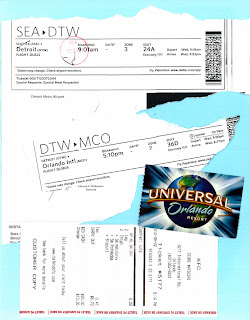 When I began this cross-country journey
in the airport line, hurrying to put things
onto the track and plastic bins, I lost sight
of my family and stepped into the Full Body
X-Ray Scanner they use for terror suspects.
A serious guard told me, “Stand this way.
Don’t move for ten seconds.” Too late,
I said, “There’s been a mistake! I shouldn’t
be in this.” Then they insisted on doing
a body search. They had seen something
suspicious. An old man tried to be kind,
nevertheless had to pat me down and
prod and afterwards he explained what
he supposed the trouble was.
I left my notebook in my shirt pocket.
To me it feels natural and it’s nearly
always there so I can write things down
as I travel this science fiction country.

I was doing some gardening the day before
our vacation clipping around a patch of red
cedars when I saw my first DC-3. The silver
wings on it blinked. It got so close to me it
stung my elbow as it veered back to land.
I could see where it went. There were others
too, coming and going. I quickly stepped
away to a distance where I could watch safely.
They swarmed about. I had stirred them up.
As I observed them buzz angrily over the
treetops, I knew what I would have to do.
You just can’t have an airport this close to
your house, where you like to garden,
where your children play ball with a
zeppelin, where your wife likes to read
billboards in the sun. So I went
to the store to the aisle in the back. It’s
amazing, there’s a deterrent for every
possible pest. There were hanging sticky
strips for P-51s and traps for Greyhound
buses. If there’s a freeway running
through your yard you can get rid of
that too. I found what I needed, a can
of spray on the shelf with big bold
orange letters, DC-3 Be Gone. I read
the tiny directions. It looked okay.
I bought it and brought it home.
The rest of the day I watched out my
window, waiting for the sun to fall,
keeping an eye on that spot where
they flew in and out. Those directions
written so small on the can told me to
wait until well dark or early morning
when the quiet air was cool and still
and the DC-3s were all fast asleep.

We were met at the Florida airport
by a big white van that took us to
the hotel. Along the way, staring at
all the nighttime lights reflected in
the swamps and ponds beside the road,
I asked the driver if there were any
alligators out there. “You want me
to stop so you can find out?” she
replied. No, I didn’t want to find out
that way, carrying luggage and
slogging through mud. I found
alligators a different way. I found
a lot of them.

*
*
*
The view from the seventh floor window
shows the blue pool below surrounded by
the many lights of amusement parks.
The kids are hungry and like a father bird
I have to fly out and look for food so I
take the room key-card and twenty dollars
and ride the elevator down.

*
*
*
The skyline is made of weird contraptions
like Frankenstein’s laboratory. Screams
and some parrot-bird sound came from
a welded umbrella high over the sidewalk.
It was getting towards twilight, neon lights
were on. I could see a place that sold
take-out so I crossed International Road.
My path meandered though, since I
reached the grassy median, I headed for
a tourist store instead.

The tourist store had the usual things
you’d expect to find. I was sort of looking
for an alligator magnet to put on our
refrigerator when we got home. I found
one too, for only $2 but by that time it
was too late for alligators. There was a
shelf right behind me piled with real
alligator heads. They were petrified in
all sizes, selected I guess to fit any
tourist bag. At the drug store next door
there were even alligator hands,
chopped off and bound to sticks
to use as backscratchers. I don’t know,
what do you say to that sort of thing?
I bought my bag full of waters and
juice and left the air-conditioned store
for the hot night. I walked back to
the hotel alongside an irrigation creek,
black and soundless and choked
with weeds. 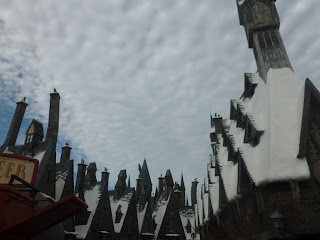 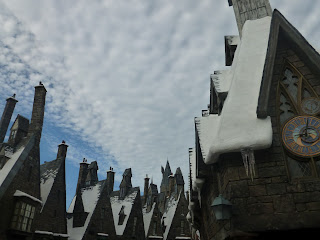 The world
in a window
on a street in Ohio

Music up above
a dove playing piano
on a black wire

On Quarry Road
the car just misses
a yellow butterfly

Marvin Gaye
the alley echoing
let’s get it on

Out on the porch
reading the paper
birds, crickets and breeze

This is also
a good time
to take a nap

Probably not many people go to
a Funeral Home on their vacation.
We almost missed it, having to
pull in the exit. The director was
out putting poison among the flowers.

‘Larry knows you are here.
You live here now,’ written
on his wheelchair.

It used to be a lumber yard.
That accounts for the huge barn
and the wide gravel parking lot
filled with old boats and old
cars turning into statues.
A man comes out to open
the locked door of the barn.
It’s huge like an overturned
wooden ship from long ago
where there are rooms under
the beams and cobwebs.
Larry has the padlock key
and we go inside a small
narrow storage room.
Boxes are stacked up.
Books with poetry
Gorky, geology and
Lake Erie Indians
all as quiet as dust.

Bill is leaving his money
to the communist party.
Today, four of them showed up
in a sedan from Chicago
three old men and a girl

I spotted it go by
from the kitchen window
so we had to grab our bikes
and track it down on
the neighborhood blocks:
Seneca Avenue, Mohawk Drive
left on Franklin to Winona Ave
finally catching the tall sight
as he came up Kiwanis
in the shade of elms.
He slowed and I asked him
what’s it called that he rides.
“It’s a High Wheeled Bicycle.
Back in the olden days they called it
an Ordinary Bicycle.” Of course
because in those times it was
only an ordinary sight.

I didn’t expect to be called upon
to kill hornets again. After Ann
was stung in the hand when she
touched the hose to wash
the lake water off, I knew
what would have to happen.
Like some Western movie
gunslinger I knew what to do.
We went to the hardware store.
The heat pounded on the tar
parking lot. There was a dog
at the window looking out.
She’s there all day they’re open.
When we got a can of spray
the dog hopped her front paws
on the counter as if to take our pay.

We were driving Route 6. I was looking
for signs of the Drive-In movie theater.
This one used to be in a field somewhere
along here. Sometimes there’s not much
left to go on, tall weeds and gravel.
I couldn’t see it. Then Larry mentioned
The Haunted Cabin. He wanted us to visit.
He tried to convince his grandson to have
his birthday party there, but the boy chose
a pizza parlor instead. Can you blame him?
Who wants a haunted cabin? The car took
a right turn towards the lake and I asked,
“Why’s it called The Haunted Cabin?”
Before Larry could explain, we were there.
Under a pile of shady trees, a cement house
with flowers growing around it and a sign
in front naming it, The Enchanted Cottage.

A couple days ago I mentioned
we were at the storage center.
The picture of an old car there
drove us back here again. I told Larry
I couldn’t get it out of my head
it just had to be the cover for this book.
So we returned on a very hot day and
parked beside it. A little time machine.
While I took photos, Larry opened
the glovebox and found a bees nest.

There were five boxes of
Super 8 film reels. My heroes,
Charlie Chaplin, Laurel and Hardy.
I like to picture someone finding them
someone who comes along into the store
and sees them glowing there and knows
just what to do. In the cricket night
set up a projector, aim it at a garage
or a wide oak tree, make sure
everyone’s around and let it roll.

The first morning chore
Ann waters the flowers
from the rainbarrel

Up here
seeing what
clouds see

It seems like
a quiet or a calm
has gone away 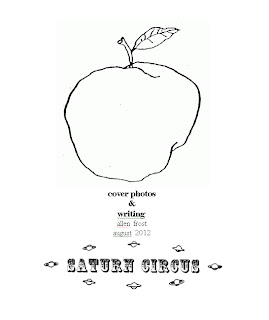 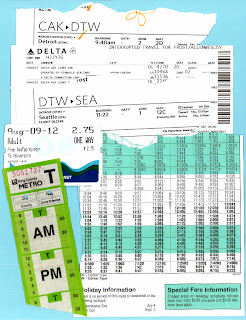 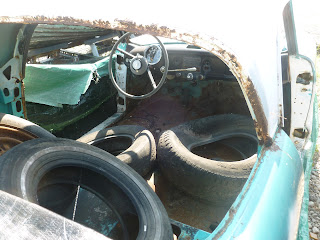 Also made 5 hand sewn copies of this book. 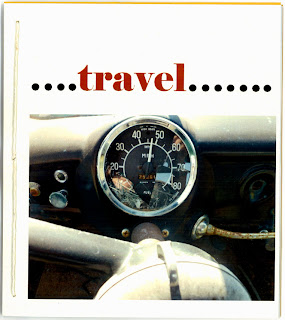 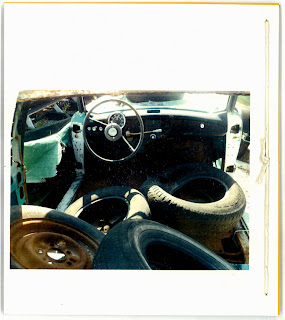 Posted by allen frost at 7:13 PM No comments: