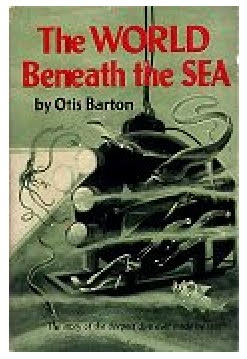 For a glimpse into the soon-to-be-published
Novel #30, let's tune in to a series of recent
dispatches:

"I think part of the problem is I'm reading
this crazed book before going to sleep.
The World Beneath the Sea, 1953, by
Otis Barton. He's a complete maniac,
a 1930's era naturalist who uses dynamite
to blow up fish, blasts shrikes in caves
with a shotgun, tries to get a sawfish and
a mako shark to fight on camera, rips
the beak off a giant squid, etc. etc.
He's a horror show. But I can't put
the book down!" 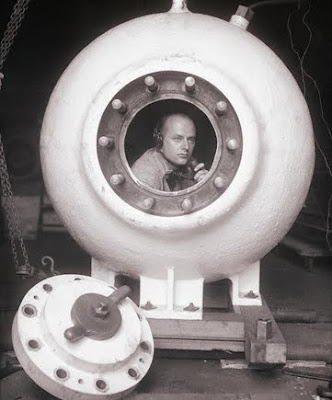 J. Genius warned:
"Yuck. That is harrowing stuff. You've got
to be careful, it lodges in your innermost
crevices and remains a lifetime. PUT IT
DOWN! BURN IT! Seriously though,
you got to be careful what you feed your
mind/soul. Ripping the beak off a giant
squid is something I would never have
considered."

Yet, after a day passed,
J. Genius wrote back:
"I've got to know what Otis Barton
is up to now?? What horrific delicasies
did he serve up last night?"


I responded:
"I ditched him. I'll let you know a little
more though. See, I wrote this novel
where a fellow lives in a bathysphere,
so I had to do some research on
bathyspheres. Which led me to
William Beebe who made the famous
half-mile deep dive record and wrote
a couple good books about his
adventures. 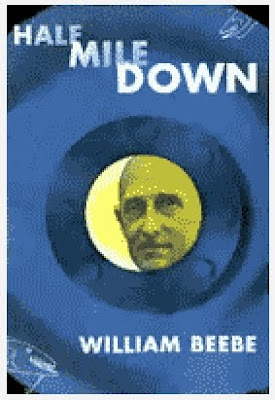 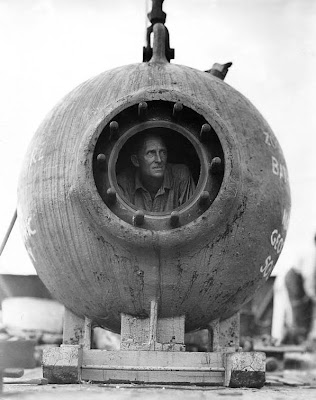 Meanwhile...well...there's Otis Barton...
lurking in Beebe's shadow. Otis invented
the bathysphere and presented it to
Beebe. Beebe took him along for several
drops in it. (Though Beebe claims that
Barton would get hysterical and moody.)
Sure enough, the two clashed. 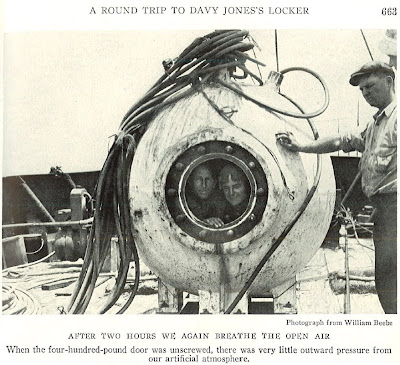 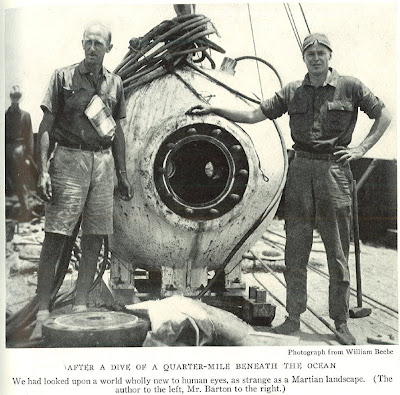 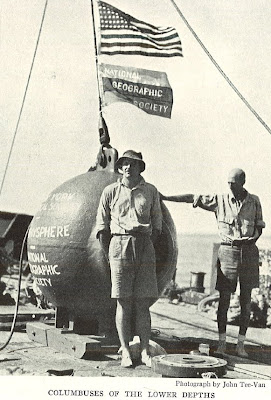 Actually, in a funny passage from
his book, Otis describes how he and
his Irish mechanic were working on
the bathysphere in the early morning,
covered in oil, cursing, and Beebe
arrives on motorboat, wearing a
white suit, with several young students
from Dartmouth in tow. Oh, it's a great
scene! So Otis carried a grudge, you
can tell. But man! That book of Otis'
is alternately fascinating and horrifying.
He was a complete maniac animal
killer. But his book also has great
moments like the Peruvian army
trying to steal a village's golden
Inca idol, but the villagers slip off
into the jungles with it, but not
before the soldiers notice a huge
furred two-fingered hand reaching
above the tree level and plucking
down a bundle of bananas.
Otis Barton was convinced
the villagers were also hiding
a presumed extinct Ice Age-era
giant sloth said to be 50 feet tall!
But I think Otis was getting
under my skin a bit, thrashing
into my dreams with a machete,
so I returned his book yesterday,
unfinished. Like you said, you
have to be careful with stuff like
that."

J. Genius returned:
"Holy Toledo! That sounds like an
incredible novel. I cannot wait to read
it! The tales of Barton and Beebe are
the very stuff of those great adventures,
pre 1950's or so, which shall never
again come to pass (at least not in
our lifetimes)."

Reply:
"Well, I've been thinking. I may have
to get Otis Barton's book again. I know
it's like going back around the corner
of the garage to check on wasp nest
after you chucked a rock at it, but I
can't shake it. I've been reading this
other book called Descent that came
out in 2005 and it goes into a lot of
detail on the Beebe/Barton feud.
(I guess it's the Donahue in me that
finds it so fascinating.) It just got
better though: After Beebe's book
Half Mile Down became an instant
best seller, Barton felt left out of the
limelight and patched together a
movie called Titans of the Deep. 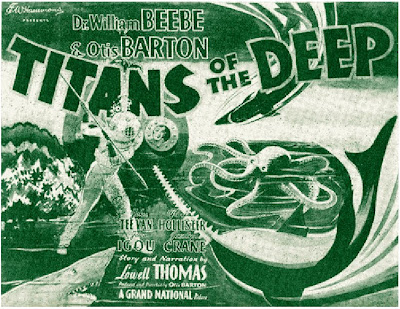 He put Beebe's name on the poster,
along with his own and filled the film
with stock footage of shark attacks,
animal battles, and a lady skindiver.
Beebe saw it at a New York city
matinee and was horrified,
immediately notifying the New
York Times and Science magazine
that he had nothing to do with
the torrid film. Oh, it's a most
fascinating slice of time, it's a
tidepool drama I'm up to my
neck in."

J. Genius concluded:
"'...I guess it's the Donahue in me...'
Well then, mon frer, that makes TWO
of us. Because I find your accounts of
these fellows simply rivetting! If you can
get these guys into your new novel it
will be a New York Times Bestseller." 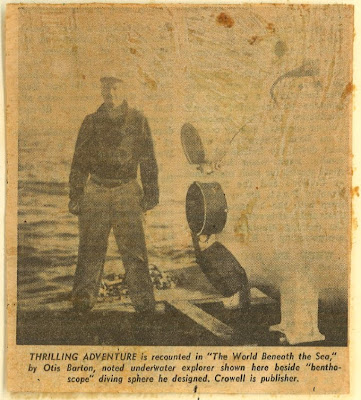 News clipping glued into cover of
Otis Barton's library book.
Well, Barton and Beebe aren't in my
new book, but the bathysphere certainly
is. As for bestseller, I guess I can only
hope.

Posted by allen frost at 9:17 AM No comments: 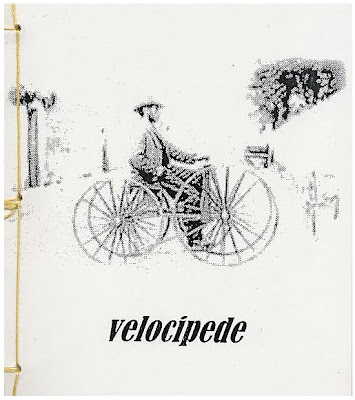 The History Channel called today. A woman is
researching for a television show on velocipedes
and she found out through the internet colossus
that I wrote a book called Velocipede.
Unfortunately, I had to let her know it was
a novel. She laughed, we hung up. Almost
my big break. A swimming pool and platinum
Hollywood pearls seep through my hands.
Afterwards, I wished I could have sent her
a copy. Written and self-published in 2002,
Velocipede takes place on the border of Aztlan.
It's a 3 part storyline featuring:
1) A factory worker who makes velocipedes.
2) A wrestler named Clover and his manager.
3) A U.S government agent, who runs out of
gas in the desert, "with his long cape of stars,
red sleeves rolled up to his elbows and blue
legs standing amid the cactus."
Posted by allen frost at 4:59 PM No comments: 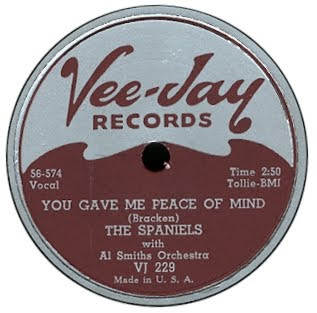 Posted by allen frost at 5:22 PM No comments: 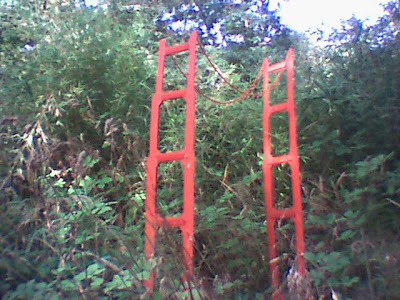 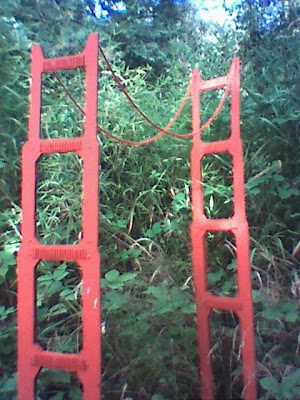 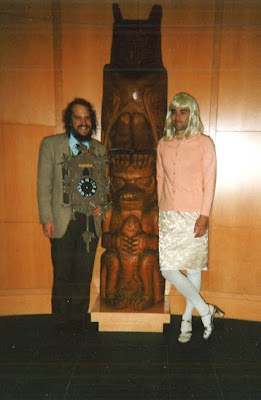 The author with Ed Wood,
wearing the Kapitalism cuckoo clock 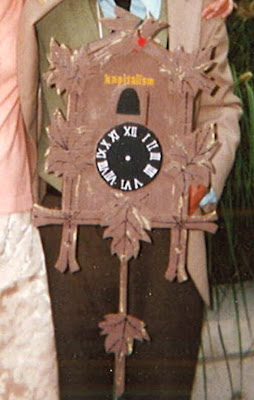 Close-up, note cuckoo with stake through heart.
Unfortunately, the clock was donated to a
short-lived artist co-op, last seen in the basement of
Bellingham's abandoned J.C Penny downtown
Posted by allen frost at 6:10 PM No comments: 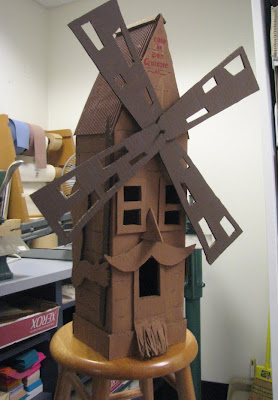 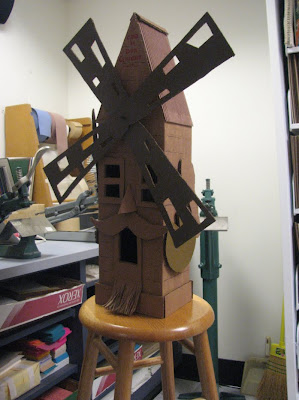 cardboard Don Quixote windmill
made during end of August
for imaginary miniature golf course
Posted by allen frost at 6:32 PM No comments: