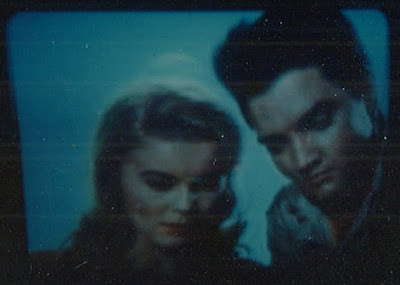 Our next door neighbor came to our door

with her hand wrapped in a red towel.

It was Elvis Presley’s death that sent her.

She was in grieving and tried to cheer up

with a big slice of chocolate cake.

Sadly, it was in the freezer, hard as a brick

and the knife had sliced her instead.

My father drove her to the hospital.

I didn’t know much about Elvis then.

I liked his song ‘In the Ghetto.’

Advertised as part of a record set

it appeared during commercial breaks

in my Saturday morning monster movies.

That weekend our neighbor took us

to the circus. Before we got to the big tent

she pointed her bandaged hand skyward.

High above the parking lot, a man ran

inside a cage, tiny as a white dot

with everyone on the ground watching

waiting for him to fall.

The photo of Elvis is from Tucker.

He used to take pictures from TV.

There's an adventure with him