Robert F. Kennedy is still alive in
another world of fiction. At the end
of my research, I return to reading
Robert Ellis Gordon's book:
WHEN BOBBY KENNEDY WAS
A MOVING MAN.

"I remember how the dresser seemed
to follow Bobby's gaze as it rose several
feet, hovered briefly above the truck bed,
slid horizontally through the air..." 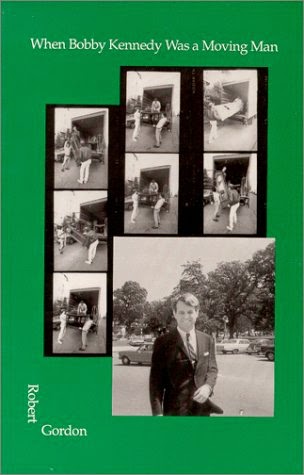 I've since finished rereading this wonderful
book. It's been a while since I read it first
and in light of the new book I'm writing
I was hoping to contact Robert to tell him
how much I enjoyed it and run some things
by him that I've been thinking about regarding
that mythical Robert F. Kennedy. Alas, I found
this site instead:
http://www.huffingtonpost.com/paul-loeb/life-lessons-from-a-dying_b_277299.html
and learned that Robert Ellis Gordon is dead too.

Also, I'm pretty sure I might have met Robert
way back when. I had some connections
to the moving men in Seattle he writes about
on Eastlake and roundabouts. I used to live
by the American Artificial Limb Company
he writes about on page 166. I swear
I remember talking to him.