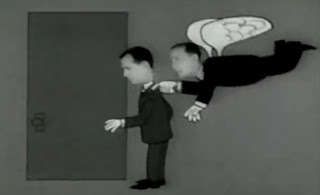 In Ohio, the famous State Theater glows beside
Lake Erie. It has been open from Vaudeville and
the Depression to this very end of the 20th century.
A crowd of bright colors bent to the ticket windows
to pay twenty dollars each and go inside. What
brought us there too was the mothlike appearance
of the Smothers Brothers. Jostling among the senior
citizens for a while, we hoped for a white haired
scalper or tickets to fall somehow on marble floor.
When we were alone, everyone was deep inside
the theater watching the red curtains and gold
carvings, we decided to sneak in.
Around the corner, we found a gray service door
propped open with a little block of wood.
I opened it only scarcely and saw red uniforms
dressed like decoys weighted down in chairs
in the hallway. Also, a man with thick black glasses
had spotted me and was bearing down like one of
Roosevelt’s dreadnoughts.
I hopped backwards and scooped my wife’s hand.
We hurried down the length of theater and around
into the parking lot. I looked back over my shoulder
and saw the door just beginning to open, slowly.
We were safe. A dangerous looking fire escape
clung to all the bricks running towards the roof.
We could hear applause washing inside the theater.
Past the next corner at the side of the wall, we
discovered a stage door there. We were so close
we listened to the heavily bolted metal and heard
the familiar guitar and bass and voices from records.
I put my hand on the door and for a few seconds
considered what would happen if I opened it.

This story appeared in Home Recordings

in 1975 Diary #1, I mentioned watching
The Smothers Brothers Show. This story
is about how close I came to meeting them. 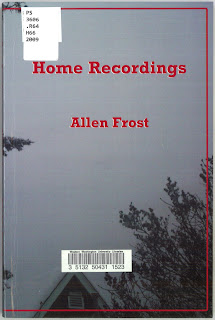