“Even as a small boy, James Flora drew pictures
to amuse himself, and though he was born and
raised on the small inland town of Bellefontaine,
Ohio, he has always loved boats. It was this love
that led him to make his home in Rowayton,
Connecticut, where his own boat can ride at
anchor just offshore. This move came only
after years of study and work—in junior college,
at an architectural school, and finally an art
school. Then there was a period when the artist
and a friend scraped together enough money to
buy a hand press and a little type, and for four
years they ran the Little Man’s Press in Cincinnati.
After that Flora, a jazz enthusiast, became art
director for Columbia records, with many of his
own designs appearing on the albums. Later, he
moved to Mexico with his growing family, and
for a year and a half stayed there, painting,
sketching, working with the local craftsmen
and artists. Later still, Mr. Flora moved to
Connecticut with his wife and five children,
where he still lives and works as a free-lance
artist.” 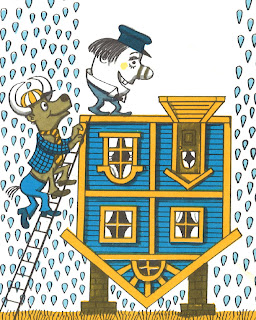