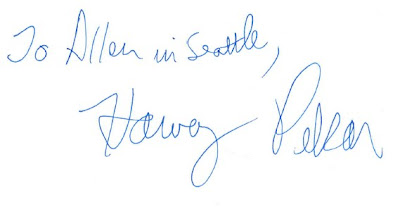 This is really the way it happened back in 1998
when I met Harvey Pekar. We had lunch
at a restaurant next to the bowling alley
in Huron, Ohio. I remember he asked
the waitress to define "chicken jo-jos,"
an item he ordered from the menu.
I asked him about that Isaac B. Singer
book 'Scum' and how was R. Crumb?
After the food, we went to his car
in the parking lot where he popped
open the big trunk to reveal scores of
LPs in cardboard boxes.

The broken gray light of winter brought down
on asphalt the scene where Cleveland barks,
"Hey! I'm selling records in the parking lot!"
to a few cold cars and two people walking out.
He opens the trunk of his sedan and there's
a cardboard box with Mendelssohn on top and
who knows what else is pushed in the stack.
The man standing next to me got hooked
looked in with Cleveland's carnival talk,
a song and dance playing strong as any
old Medicine Show. I watched Cleveland
rope him in to a 50 cent sale and then
it was only after bows goodbyes entailed
when the car drove away we discovered
a colorful sleeve with no vinyl inside. 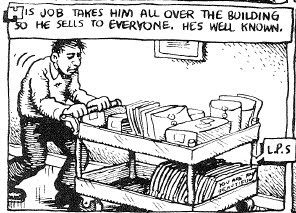