Thank you to Larry Smith for this review of new book Kennedy:

Allen Frost’s new novel Kennedy, moves us 20 years ahead
from his previous Roosevelt into the week around the Cuban
Missile Crisis in October 1962. “Vintage” best describes this
intimate tale of a young boy and his relationships with life in
Bellingham, Washington, with girls, and with his much-loved
grandparents. As in all of Frost’s work, the poet emerges in
the details and in the swing of the prose, capturing youthful
sensitivity and the emotions around love and loss.
The highway coming through his town forebodes disruption
and change. “The machinery was already at work on the
highway. It made a low rumble and clank like the engine
room of a ferryboat.” His metaphors are little treasures found
along the trail of this book’s details and plot. When he allows
his mind to focus on a young classmate, “The yellow pencil
drifted off course from words about the Colony and before
he knew it, it had written Caroline. Her name had appeared
so out of the blue it looked like someone had planted a
flower in all those rows of lead colored words.”
When his grandmother faces a great loss, he finds her
changed, “She seemed to float out; he felt like he was
holding onto a paper version of his grandmother. She
could have been folded origami. If the breeze was any
stronger, she might be swept into the sky.” These
marvelous lines are woven around a simple plot that
includes the words of then President John F. Kennedy
whose courage and character balance out the losses
then, as it still does today.
Thanks to Fred Sodt for his classic illustrations.
Kennedy is woven in history and perspective
and is a book for all time. 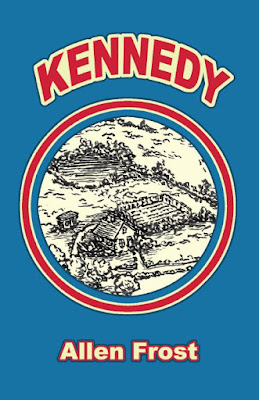 Allen Frost is the author of 52 published books available on Amazon.com